I’m Bored
Written by Michael Ian Black. Illustrated by Debbie Ridpath Ohi.
Simon & Schuster (2012)
SUMMARY: When a bored girl meets a potato who finds children tedious, she tries to prove him wrong by demonstrating all of the things they can do, from turning cartwheels to using their imaginations.
NOTE: The narrative is composed of a conversation between a girl and a potato. 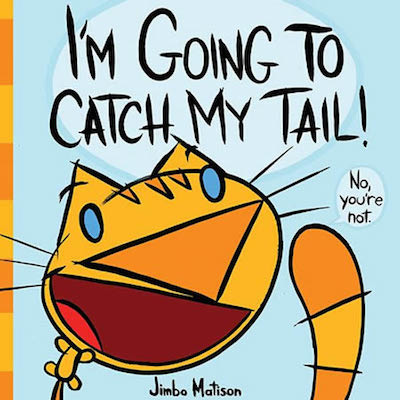 I'm Going to Catch My Tail
Written by Jim Matison. Illustrated by Jim Matison.
Abrams (2014)
SUMMARY: A rambunctious kitty wakes up with a mission: he is going to finally catch his tail. Through mountains of toilet paper, under the covers, into the laundry basket (with a quick stop at the litter box), and beyond, the tireless kitty continues his never-end
NOTE: The narrative is a conversation between the cat and his tail, which is trying to catch.
Page 9 of 18